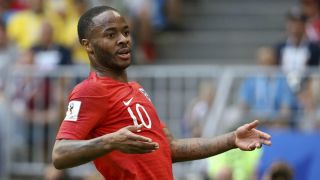 Eric Dier has been astonished by Raheem Sterling's focus and attitude despite negative coverage in sections of the British media ahead of and during the World Cup.

Sterling received criticism prior to the World Cup when a British tabloid targeted him for having a gun tattooed on his leg.

The Manchester City star provided an explanation soon after, saying it was a tribute to his father who was murdered when Sterling was just two years old, but the scrutiny continued.

Sterling has found his performances being placed under the microscope arguably more than any other England player by certain publications.

And Dier feels Sterling's handling of the whole situation has been nothing short of "incredible", before going on to laud his team-mate's World Cup performances.

"First of all, the way Raheem handled everything has been incredible," Dier told reporters. "The way he goes about his job has been fantastic, his attitude, work ethic, both fantastic as well.

"He offers so much to the team. His forward runs and quality in possession, he can link the play or go behind.

"It's so clear to see if you were to watch back the games, the importance he has on the team. I think he's had a fantastic World Cup."

While Sterling has been a regular target of criticism, Kieran Trippier has been almost universally lauded for his performances as a right wing-back.

And Dier, who plays alongside him at club level with Tottenham, could not hide his delight for the former Burnley full-back.

"He's had a fantastic tournament, I'm so happy for him," Dier said. "It [the praise] is fully deserved.

"I feel this past season at Tottenham he's come on so much, maybe that's not been noticed as much as it should've been.

"But the level and consistency he's shown has been incredible, and obviously some are comparing him to [David] Beckham for his deliveries and that's great for him."