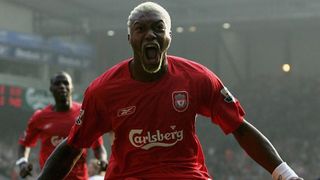 The French striker agreed to join Gerard Houllier’s side in 2003 after scoring 60 goals in 115 games for Auxerre, but he arrived on Merseyside a year later to find his compatriot replaced by Rafael Benitez in the Anfield dugout.

Cissé had signed off at the Stade de l’Abbe-Deschamps with a Ligue 1-topping 26 goals, but his hopes of hitting the ground running in England were dashed after just 15 matches when he broke a leg in two places at Blackburn.

Remarkably, he returned six months later and converted a penalty in Liverpool’s 2005 Champions League Final shootout success over Milan. But despite netting 19 times the following campaign, including one in the FA Cup final against West Ham, Cissé was deemed surplus to requirements.

As Dirk Kuyt and Craig Bellamy came in, Cissé went out on loan to Marseille, suffering another leg break before making the move permanent in July 2007, when Liverpool signed Fernando Torres from Atletico Madrid.

SUMMER SALE Just £9.99 for the first six months with a FFT subscription

Speaking in the August 2020 issue of FourFourTwo – out now in shops and available online with free delivery – the Frenchman insists he had a lot more to offer in a Reds shirt had Benitez backed him.

“That was a difficult time – a frustrating time,” he says. “Remember, I signed for Liverpool in 2003, before playing one last season at Auxerre. Then I got badly injured, so I was impatient to make things happen at Anfield. It was a very long wait. I had to acclimatise and get to know people.

“I scored at Tottenham in my first league game under Rafa, but things slowed down for me and it was tough. I had a five-year contract and wanted to see it out, but Rafa had different ideas and eventually signed Torres. That’s football, although I wish I’d been given a bit more time.”

Moving to Marseille at least gave Arles-born Cissé the chance to play for his boyhood club, and he has fond memories of his debut goal for l’OM after recovering from a second serious leg injury.

“There were mixed feelings,” he admits. “I grew up a big Marseille fan, so of course I was excited to join them, but I didn’t want to leave Liverpool. By now I had a family, and my kids were settled. As I said, I had waited a long time to make it there. You can’t stand still, though. I was a goalscorer, I was a No.9, and they can’t sit on the bench; they have to play.

“I remember scoring my first goal for Marseille at the Stade Velodrome after returning from injury [in December 2006]. It was brilliant to be playing in that ground for the team I loved as a boy.”

Read the full chat with Djibril Cissé in the August 2020 issue of FourFourTwo – featuring an exclusive cover interview with Dennis Bergkamp, 25 years on from his arrival at Arsenal. We also remember more era-defining icons, hear the confessions of Nile Ranger, remember when Celtic halted Ranger’s charge for 10 titles in a row, speak to Bayern Munich’s Joshua Kimmich, mourn Atalanta’s season of muted celebrations and much more. Grab a copy in shops or online!