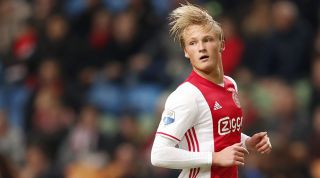 The 19-year-old, who was spotted by the same Ajax scout who discovered Zlatan Ibrahimovic and Christian Eriksen, has taken the Eredivisie by storm since arriving in the Dutch capital from Danish Superliga side Silkeborg in the summer of 2016.

Dolberg netted on his competitive debut for the Amsterdam giants – a Champions League qualifier at home to PAOK – and hit a hat-trick against NEC in November, making him the youngest non-Dutch player to ever notch a treble for the club.

The hat-trick came just nine days after making his senior debut for Denmark, and with 14 league goals this term, even the player himself is surprised by his rise.

Speaking exclusively in the June 2017 issue of FourFourTwo magazine, Dolberg says: “My goal [this season] was to play for Ajax’s reserve team, become their best player and maybe get a few matches in the first team.

“But then Arek Milik went to Napoli and I got the chance. Then in the first game of the season I played and scored against PAOK in a Champions League qualifier. From that point I was motivated. The coach gave me confidence to play in the way I’ve always done.”

Manchester United, Manchester City, Liverpool and Everton are just some of the clubs apparently lining up bids for the teenager. However, Dolberg insists such speculation is premature, and that his focus is only on playing regularly for Ajax.

“It’s too big a step to go to City or United now,” he says. “It’s important to keep on playing, as I don’t know what could happen in the future.

“I haven't got a dream league. When I was young it was Barcelona [that was my favourite team], but once I got older I didn’t have one. In England, I followed Arsenal because of Thierry Henry, but it wasn’t like Arsenal was my favourite.”

Read the full interview with Kasper Dolberg in the June 2017 issue of FourFourTwo, in which we profile Barcelona and Brazil superstar Neymar and his quest to take on Lionel Messi’s mantle as the best player on the planet. Also this month, we slip on a neon jacket and become a steward for a day at The Hawthorns, speak to Chelsea defender David Luiz and Southampton striker Manolo Gabbiadini, go One-on-One with former Germany international Christian Ziege, review 23 of the game’s maddest owners and remember when Manchester United stopped Liverpool from completing an unprecedented Treble in the 1977 FA Cup Final. Order it now, and then subscribe!