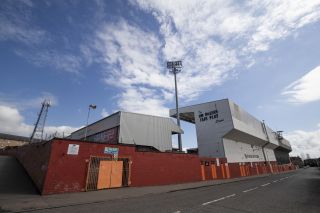 Dundee United have appealed to rival clubs to help fund their £150,000 legal bill after vowing to fight on against attempts to deny Scotland’s lower-league champions promotion.

The Championship winners, along with League One and Two victors Raith Rovers and Cove Rangers, were dragged into a courtroom dispute between relegated duo Hearts and Partick Thistle and the Scottish Professional Football League as they sought to block their enforced demotions.

The case was heard at the Court of Session last week but Lord Clark ruled the relegated pair would have to go before a Scottish Football Association arbitration panel for a final decision.

United say they, along with Raith and Cove, have already run up £50,000 legal costs – with that figure set to spiral further if they continue to play a part in proceedings.

However, Tannadice chiefs insist the costly fight is too important to walk away from and have now urged fellow SPFL members to contribute to a crowdfunding campaign.

In a statement, the Tayside outfit said: “On the day that the SPFL have released the Premiership fixture list for 2020/21, which is scheduled to start on 1st August, instead of looking forward and planning for the forthcoming season, the executive team and board at the club are embroiled in preparation work for the SFA arbitration process that starts this week in respect of the action raised by Heart of Midlothian and Partick Thistle.

“As confirmed in our joint statement on Friday, we, along with Raith Rovers and Cove Rangers, were pleased with Lord Clark’s decision to refer the dispute to arbitration, however we remain incensed that we are having to devote considerable time and incur significant legal costs in defending this action.

“Together we have already incurred costs of over £50,000, and face further legal fees for the arbitration process that could take the total bill to over £150,000.

“Given the serious financial implications of these escalating legal costs for Raith Rovers, Cove Rangers and ourselves, the three clubs have considered withdrawing from the arbitration process and allowing the expert panel of arbiters to judge the case raised by Heart of Midlothian and Partick Thistle without any submissions from us in defence of our case.

“However, we believe (and our external legal advisors have confirmed same) that there is too much at stake to not defend our position against the Heart of Midlothian and Partick Thistle petition, which is seeking to reverse a decision that was made by 81% of the SPFL member clubs.

“If successful in their action, in our opinion Heart of Midlothian and Partick Thistle would compromise the sporting integrity of the SPFL with clubs having been declared champions of their league not being promoted.

“Having won the Championship by a considerable margin, and invested substantial sums of money in preparing for next season in the Premiership, a decision to overturn the SPFL resolution that was supported by 34 of the 42 member clubs would be ruinous for us and our fans.

“It is with these factors in mind, that, along with Raith Rovers and Cove Rangers, we are reaching out to our fellow member clubs for support in defending this action, which has not only potentially grave consequences for us, but every SPFL club.

NEWS | The Scottish FA has received a notice of referral to arbitration.https://t.co/7JBKzsxhMf— Scottish FA (@ScottishFA) July 6, 2020

“We also intend running a crowdfunding campaign to raise money to help fund the huge legal bills that we face. We hope that as well as our own supporters, fans of clubs across Scotland will see this as a worthy cause to get behind in that if Heart of Midlothian and Partick Thistle are successful in their action it could have serious ramifications for the whole of Scottish football.”

The SFA confirmed they have now had a formal application for arbitration and would look to start the process as quickly as possible.

Hampden chiefs said in a statement: “Following receipt of the referral to arbitration, parties will now select from a tribunal candidate list and the two arbitrators appointed will then jointly appoint a third, who will be a solicitor or advocate or member of the judiciary (Sheriff Court or Court of Session) of not less than 10 years’ standing.

“As soon as practicable after it has been convened, the tribunal will commence a meeting with the parties. As this process is entirely independent, the Scottish FA will make no further comment.”