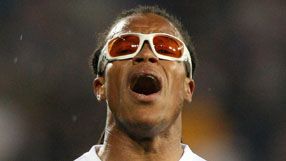 The tough-tackling midfielder, known for wearing protective glasses throughout most of his career, has agreed to become joint head coach of the North London side and has expressed an interest in pulling on his boots again after a two-year hiatus.

"I'm happy to explore my possibilities and share my knowledge and experience with Barnet Football Club. I am very excited about the challenge ahead," Davids said in a statement on the club's website.

Davids, 39, last played for Crystal Palace in the English Championship in 2010 after picking up honours throughout his career, which also featured spells at Inter Milan, Ajax Amsterdam and Tottenham Hotspur.

Barnet are bottom of League Two and face a battle to avoid relegation to the Conference, which features a number of part-time teams.

"I am delighted to welcome Edgar to our club. His experience as a player throughout his illustrious career will be a massive benefit to all our players and I look forward to forming a strong partnership with him," said Mark Robson, who will manage the team alongside Davids.

Barnet Chairman Tony Kleanthous hailed the signing of the diminutive, dreadlocked midfielder, who won more than 70 caps for his country.

"I am absolutely delighted to welcome Edgar as part of our exciting set up at Barnet FC," Kleanthous said.

"We have world class training facilities that are now attracting world class players and I feel, despite recent results, that these are exciting times ahead for our club."