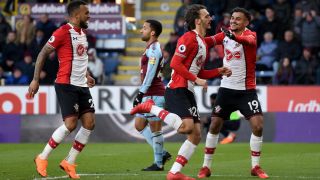 Sean Dyche claimed Burnley were not given an even chance of beating Southampton after Manolo Gabbiadini's last-minute equaliser clinched a 1-1 draw at Turf Moor.

Dyche described the goal that condemned his side to an 11th winless Premier League match in succession as "hard to take" and pointed to a number of moments in the game when he felt decisions went against the Clarets.

The hosts led after 67 minutes when Ashley Barnes headed in from close range, although Dyche alleged he was fouled in the build-up.

Southampton substitutes Josh Sims, Sofiane Boufal and Gabbiadini then made a decisive impact late in the game.

Dyche claimed referee Robert Madley inhibited the Burnley defence before Southampton broke for the goal and the manager also said he saw a foul in the box that helped Gabbiadini to score.

"It's one of those moments you don't wish to happen in football," he told BBC Sport. "The referee gets in the way and puts them on the counter-attack.

"The final moment is hard to take. We all know how people go to the floor in the Premier League and our centre-half is put off balance by their centre-forward with an arm across his shirt and it's not given.

"Ashley Barnes was pulled down in the box at the end of the game – not given. He's actually pushed in the back on the goal. We haven't had a penalty all season."

Burnley stayed seventh in the Premier League after the draw but Dyche cut a frustrated figure, having not seen his side win since December.

"You do come away a bit disappointed," he added. "We can control the players' performance and we played well enough today.

"It was a solid enough performance to take all three points so I can understand why the fans are disappointed.

"Overall, it's another point on the board. It's a performance that I thought warranted a win. I thought we'd done enough."

Southampton's Mauricio Pellegrino felt his players deserved a share of the points and reserved praise for Boufal, who played the final 15 minutes in midfield.

"I think the game was really tight," the manager told BBC Solent Sport. "In this physical battle some teams may be stronger than us but I think the most clear chances in the first half were for us."

Of Oriol Romeu's withdrawal in the 75th minute, he said: "The change made a big impact in the team. Sofiane is a player that can change the game."

The draw moved Southampton out of the relegation zone but Pellegrino acknowledged that his side must start winning if they are to avoid the drop.

"If we draw we have to try to win the next game and think little-by-little," he added. "We are not happy with this result to be honest."