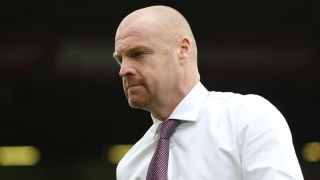 Sean Dyche insists he is unaware of any approach regarding the vacant Leicester City manager's post and was quick to dismiss reports linking him with the role as "a good story for the media".

The Burnley boss has been touted as a possible replacement for Craig Shakespeare following the latter's sacking on Tuesday, in the wake of the Foxes' poor start to 2017-18.

Leicester sit third from bottom in the Premier League with just one win from eight matches ahead of their trip to Swansea City on Saturday, when the Clarets - flying high in seventh with just one defeat - face the daunting task of visiting free-scoring leaders Manchester City.

"It's not the first time I've been linked. You're flattered by it. It's some form of recognition of the work done," he told a media conference.

"It's a paper story. I've never been aware of any approach. There's nothing in my consideration other than Man City."

On their first visit to the Etihad, left it late to snatch a point in a six-goal thrillerOctober 17, 2017

In additional quotes reported by the Burnley express, he said: "It's the same as before with any speculation - the team is going well and a job comes up, and it's a good story for the media.

"But it's come from the media, not me. We've been here before, it's one of those things.

"It's nice in a way, but it doesn't mean there's any truth in it. It's another media story built out of nothing. We get it every year with players, and when your players are recognised like that, it's healthy - it shows the club is working, the players are doing well and we have had some form of success, relative to us as a club.

"So it's a similar thing with myself, my team and my staff. We're doing well and it reflects on me. You take the hits as a manager, so you enjoy the good times as well, and we have done well as a collective over a period of time now."