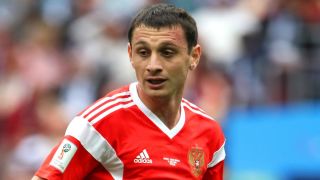 Alan Dzagoev has returned to training ahead of Russia's World Cup quarter-final against Croatia and insists he is ready to play in Sochi on Sunday.

The 28-year-old midfielder has not featured for Stanislav Cherchesov's side since he suffered a hamstring injury after 24 minutes of Russia's 5-0 victory over Saudi Arabia in the opening match of the World Cup, a game where his replacement Denis Cheryshev scored twice.

He was an unused substitute during the penalty shoot-out victory over Spain in the round of 16, and missed Russia's training session on Wednesday with back muscle problems, but he told reporters he is ready to return to the starting 11 if selected.

"It was an old injury, the back, I trained today," Dzagoev said on Thursday. "I'm ready for the game.

"We're having a great World Cup in Russia and those teams who have been eliminated deserved it."

Dzagoev, who scored three goals in 21 league appearances for CSKA Moscow in 2017-18, said that Cherchesov had yet to reveal his game plan for the quarter-final to the Russia players.

A first-half penalty scored by Artem Dzyuba saw Spain held to a 1-1 draw before Koke and Iago Aspas missed crucial penalties in the shoot-out to send Russia through to the last eight, but Dzagoev suggested they would not take the same approach against Croatia.

"Everything depends on the opponent," he said. "Spain can take control over any team, so we could not play in any other way.

"Closer to the match against Croatia, Cherchesov will tell us how to play. I hope we'll prove that we can play football in the upcoming match.

"I think Croatia are upset that they will play against us because we are the host nation.

"The whole of Russia will be supporting us. I hope we don't disappoint our fans."