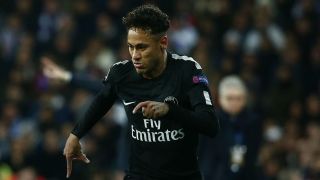 Neymar will re-join Paris Saint-Germain's squad over the next two days but outgoing head coach Unai Emery does not know when the Brazil star will be ready to play a full part in training.

The world's most expensive player has been sidelined since suffering a broken metatarsal during a 3-0 Ligue 1 win over Marseille at the end of February.

His race to be at peak fitness in time for Brazil's World Cup campaign in Russia has remained a source of intrigue and Neymar told reporters last month he was eyeing a return to training on May 17 – two days before PSG's final game of their triumphant Ligue 1 campaign against Caen.

Speaking at a news conference to preview the champions' trip to Amiens, Emery offered hope that the 26-year-old might come back ahead of schedule.

"Training with the group? For now, I do not think so. I do not know – we will see when he arrives."

Neymar has scored 28 goals in 30 competitive appearances for PSG since arriving for €222million from Barcelona.

Emery will be without captain Thiago Silva and winger Julian Draxler due to muscular problems for the Amiens game, while Marco Verratti underwent adductor surgery on Thursday and is out for the rest of the season.