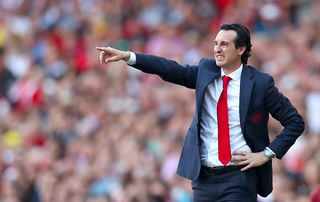 Mesut Ozil and Pierre-Emerick Aubameyang struck for Arsenal but the Gunners never looked like pulling off any kind of rescue act, leaving manager Emery counting the cost in defeat.

“It was very frustrating because it was a big opportunity,” said Emery.

“But we’ve had plenty of big opportunities before today, plenty of key moments, that give us the opportunity to achieve our first target, to play in the Champions League next year.

“But yes, today we lost a big opportunity. It doesn’t change our idea or plan for the next match. It’s in our hands. I still have confidence though and I want to be positive.

“Because we have been working hard to be in this key moment with the chance to finish in the top four.

“We can be proud of the whole season. Today we’re frustrated but tomorrow we have to stand up and prepare for Wednesday’s trip to Wolves.”

Shkodran Mustafi produced a string of mistakes on a day to forget in the Easter sun in north London, but boss Emery refused to lay the blame at the feet of the Germany defender.

“And today also against players like Benteke, Zaha, you can suffer more than in different situations. If we were better in set-pieces we could win this match.

“And also if we could control possession especially in the attacking third. We didn’t find the best situation to take more chances. I think Mustafi has been consistent (across the season).”

“I thought we were good value for our three goals because we carried that threat with two front players.

“I think Christian is more than just a goalscorer, his all-round performance was fantastic.

“But it is true that front players need goals and I’m sure it will be a weight off his mind.”