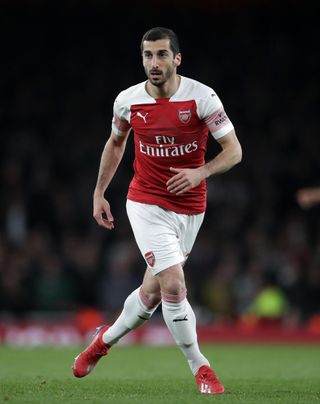 Unai Emery respects the “personal” nature of Henrikh Mkhitaryan’s decision not to play in the Europa League final but concedes it is “bad news” for his Arsenal side.

The Armenian’s safety was a concern because of the dispute between his country and Azerbaijan, the host nation of next week’s fixture between the Gunners and Chelsea.

Despite receiving assurances aimed at allaying those fears, Mkhitaryan has chosen not to travel to Baku following discussions with the club and his family.

“I discussed this with Mkhitaryan,” said the Arsenal manager. “It’s a very personal decision. He wants to play with the team, but he spoke with his family and decided not to go.

“It’s bad news, but we cannot do anything about these issues. It’s a very, very personal decision and we need to respect him. I don’t understand the political problems, but I must respect (his decision).

“I spoke to him. I came from the Basque country, where we had a big political problem there, finishing five or six years ago. This is a very personal decision; I cannot push him to come with us.

“For him and for me, it’s very important to (have his) help with his quality and his capacity, but these issues are out of my hands and I understand 100 per cent.”

[…] It‘s the kind of game that doesn’t come along very often for us players and I must admit, it hurts me a lot to miss it.I will be cheering my teammates on! Let’s bring it home @Arsenal 🏆💪🏼💪🏼💪🏼 #uel#final#arsenal#chelsea#AFC#COYGpic.twitter.com/gnDA6oyolw— Henrikh Mkhitaryan (@HenrikhMkh) May 21, 2019

Mkhitaryan’s absence, in addition to that of the injured Aaron Ramsey, who is departing for Juventus, increases Mesut Ozil’s hopes of starting at the Baku Olympic Stadium.

Like Ramsey, Petr Cech will not be at Arsenal next season, having taken the decision to retire at the age of 37, but Emery hinted that despite losing his first-team place to Bernd Leno, the veteran goalkeeper is likely to start.

“Ozil has very big experience in Europe, playing with his national team, important games,” he said. “We are preparing for every player to be ready for the final. He’s working, he’s trying, he’s playing well and we need him.

“(Cech’s) here because he deserves to be here. His commitment to Arsenal is big. He was playing the last (Europa League) matches, perfect matches, with big performances. I want to enjoy with him this final in his career.

“I’m a privileged coach to be with him. We’re going to use all our effort to win and to be together and enjoy this final together.

“I trust and believe in him. I can use him, I can use Leno, but above all I want to enjoy this with the players, and (what is) a special moment for some players.

“I spoke with Aaron Ramsey, who’s injured, but it’s the same with Petr Cech. I want to be with him (for) his last match, playing or not.”