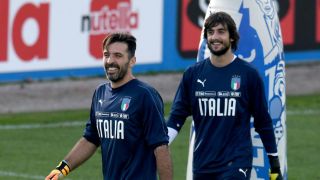 Mattia Perin has acknowledged trying to emulate Gianluigi Buffon's success at Juventus might be an impossible challenge.

Iconic goalkeeper Buffon brought an end to his illustrious 17-year stay at Juve, which included nine Serie A titles and four domestic doubles, when his contract expired following the 2017-18 season.

The 40-year-old will continue his career at Paris Saint-Germain, where he has signed for the upcoming campaign with an option to extend for another.

When asked if Buffon's legacy in Turin weighed on him following his €12million switch from Genoa, Italy international Perin said: "To emulate what Gigi did will be difficult, if not impossible.

"He is the most gifted goalkeeper in football history. He is the reference point for all goalkeepers. Training with him was a privilege and an honour for me.

"I can understand his choice. Knowing him as a competitive person who likes a challenge, only a champion of his stature could accept a challenge like playing beyond 40."

Perin will initially serve as back-up to Wojciech Szczesny, who proved his credentials by keeping 11 clean sheets in 17 Serie A appearances in 2017-18, but hopes to challenge for the starting spot under Massimiliano Allegri.

"I know that I'll start with a disadvantage, but the competition will do Szczesny and I good," he said.

"He had some great performances last year and has earned the place of Gigi's successor. I will try to always train at my best and be ready when called upon.

"I'm here to improve and get involved. I do not like easy challenges and I'm here to prove my worth and play for the starting spot."