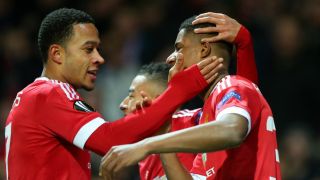 Manchester United secured a 5-1 win over Midtjylland to progress to the round of 16 courtesy of a 6-3 aggregate score.

Louis van Gaal's side found themselves in trouble when Pione Sisto opened the scoring after 28 minutes of play, but United immediately replied when Nikolay Bodurov beat his own goalkeeper after a Memphis Depay cross.

Juan Mata missed the chance to gift his side the lead when he failed to convert a penalty shortly before the break, but United would set the record straight after the interval. Debutant Marcus Rashford scored twice, before Ander Herrera and Depay decided the tie in the closing stages, with Midtjylland reduced to 10 men in the 89th minute following Andre Romer's dismissal.

A single James Milner strike was enough to help Liverpool past Augsburg after last week's scoreless draw, with the versatile midfielder netting from the spot early on.

Second-half goals from Rodrigo, Sofiane Feghouli, Pablo Piatti and Ruben Vezo helped Valencia to a 4-0 away win over Rapid Wien, making it 10-0 on aggregate for Gary Neville's men.

Borussia Dortmund progressed to the next round at the expense of Porto, with Iker Casillas' unfortunate own goal making the difference on Thursday.

Tottenham recorded an impressive 3-0 home win over Fiorentina to book their ticket for the round of 16 after last week's 1-1 draw.

Ryan Mason found the net in the opening 45 minutes, before Erik Lamela and an own goal from Gonzalo Rodriguez made it three after the break.

Villarreal made it through at the expense of Napoli as Tomas Pina cancelled out Marek Hamsik's opener for a 1-1 draw after their 1-0 first-leg win, while Sevilla reached the last 16 irrespective of their 1-0 loss against Molde.

Basel shocked Saint-Etienne 2-1 (4-4 agg) to go through, with Luca Zuffi the hero following his last-minute winner, while Shakhtar Donetsk beat Schalke 3-0 in Gelsenkirchen to progress, with Marlos, Facundo Ferreyra and Viktor Kovalenko finding the net.

A fine second-half performance saw Lazio record a 3-1 victory over Galatasaray to progress, with Marco Parolo, Felipe Anderson and Miroslav Klose among the goalscorers for the Serie A side.

Bayer Leverkusen saw off Sporting CP 3-1 at the BayArena, with Karim Bellarabi putting in a man of the match performance to lead the way for his side.

Anderlecht needed extra time to end Olympiacos' European dreams, with Franck Acheampong netting twice in extra time to make it 2-1 on the evening and 3-1 on aggregate.

Fenerbahce recorded a 1-1 draw with Lokomotiv Moscow to book their ticket for the next round after last week's 2-0 victory, while Sparta Prague saw off Krasnodar 3-0 to qualify.