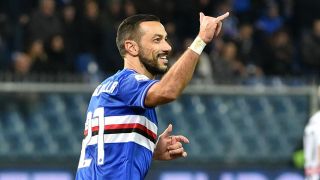 The 35-year-old former Italy international is enjoying a sensational season in Italy's top flight and took his tally for the campaign to 16 league goals with a pair of penalties against former club Udinese.

Samp ran out 4-0 winners and Quagliarella's opening goal in the first half saw him find the net for an 11th consecutive Serie A game. The run began against AC Milan in October, with the forward sitting out a 4-1 defeat at Roma two weeks later.

Only Fiorentina great Batistuta has recorded a streak of that length, scoring 11 straight league matches for the Viola in 1994.

The evergreen Quagliarella now has the opportunity to take the outright record by scoring against Napoli at the Stadio San Paolo next week.

11 - Fabio #Quagliarella has scored in 11 consecutive Serie A games played, the joint-longest such run in the history of the competition, equalling Gabriel Omar Batistuta (11 in a row in 1994). Olympus. #SampdoriaUdinesepic.twitter.com/vUlIJrxw2N— OptaPaolo (@OptaPaolo) January 26, 2019