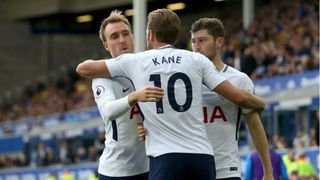 Harry Kane's 100th Tottenham goal set the tone for a convincing display from Mauricio Pochettino's side as they cruised to a 3-0 Premier League victory against a lacklustre Everton at Goodison Park.

The England striker had been stuck on 99 for Spurs since his hat-trick against Hull City on the final day of last season, but he finally brought up his century 28 minutes in with a miss-hit cross that caught out Jordan Pickford.

Ronald Koeman's side offered little going forward, and were duly punished at the other end when Christian Eriksen added a second three minutes prior to half-time.

Everton's day was made worse almost immediately after the restart, Kane doubling his tally to guarantee the points.

It represents a first victory for Tottenham since the opening-weekend triumph at Newcastle United, teeing them up perfectly for the Champions League clash with Borussia Dortmund on Wednesday.

Everton, meanwhile, have just one win from their opening four fixtures, with Manchester United next up in the Premier League for the Toffees after a midweek meeting with Atalanta in the Europa League.

In a fast-paced opening, it was Everton who went close first as Cuco Martina picked out Sandro Ramirez, who failed to find the target under pressure from Toby Alderweireld.

Tottenham were soon on the front foot, though, Eriksen drilling wide before Moussa Sissoko's goal-bound strike was blocked on the line by Ashley Williams.

But Everton's resolve was soon broken, as Kane brought up his century with a large slice of fortune.

goals for as he beats Pickford to give us the lead at Goodison! September 9, 2017

Having drifted out to the right flank, the forward floated in a cross that drifted over Pickford and in, and it did not take long for Tottenham to extend their lead.

Reckless defending from Martina enabled Ben Davies to get in down the left, and though his strike was well saved by Pickford, Eriksen was on hand to thump home.

Pochettino's side should have been further ahead in first-half stoppage time - Dele Alli failing to connect with Kane's cross before the striker dragged an effort wide from the edge of the area.

Koeman made changes at the interval, only for the game to be all-but over a minute into the second half.

Kane was afforded ample freedom as he picked out Davies, proceeding to stroll into Everton's area to tuck home unchallenged from the Welshman's resulting cross.

Struggling badly at the back, Everton were penetrated once more soon after - Pickford pulling off two fine saves to deny Kane and then Eriksen, before Sissoko headed over from close range.

Everton were almost gifted a goal shortly after the hour as Hugo Lloris' clearance was intercepted by Idrissa Gueye, whose first-time shot trickled wide of an open net.

The Toffees had another sighting of goal late on, though after a difficult few weeks in his personal life, Wayne Rooney failed to conclude a subdued performance with a consolation when he headed Leighton Baines’ cross off target from five yards out as Tottenham eased to a comfortable win.