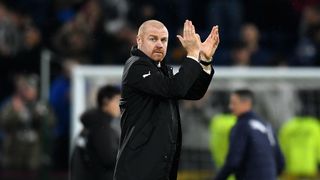 Sean Dyche insists the prospect of being offered the manager's job at Everton will not distract him from the task in hand at Burnley.

Dyche showed once again why he is a man in demand as his well-drilled and tenacious side rose to seventh in the Premier League table with a 1-0 win over Newcastle United at Turf Moor on Monday.

Jeff Hendrick struck 16 minutes from time on the end of a magnificent cross from Johann Gudmundsson, although the looming Goodison Park vacancy was inevitably on the post-match agenda.

Asked on Sky Sports what would happen if Everton made an approach, Dyche replied: "I just keep getting on with my job, as simple as that.

"We just keep getting on with it. That's my focus and my team's focus

Jack Cork was named man of the match, shining as Burnley's midfield fulcrum and playing a vital role in the build-up to Hendrick's winner.

"It's very difficult at this level to win games but we've often found a way and we did that with a very good goal," Dyche said.

"I've never made out that we're an expansive side that can have 600 passes a game because I don’t think that's relevant to this group - but we can play a bit.

"The ball for the goal from Johann is a fantastic cross and there was a great press to start the moment for the goal. There were a lot of good signs there."

There were suspicions of a foul by Steven Defour on Ayoze Perez before Cork seized possession in the game's decisive moment, but Newcastle boss Rafael Benitez had no complaints.

"I think it was an even game, a game that we were controlling and we knew by scoring one goal we could win or, in this case, we could lose," he told Sky Sports.

"We made a mistake, we gave the ball away in the middle and we could not recover.

"We know our strengths and our weaknesses. We have to improve in everything but still I'm happy with the work rate of the players and how they are approaching every game."