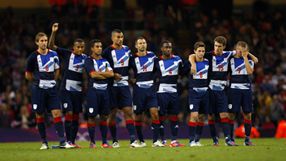 Britain returned to the Olympic finals this summer for the first time since 1960 in Rome.

It was also the first time since 1972, when they were eliminated in the qualifiers, that they had taken part in the event.

The issue is politically sensitive as the Scotland, Wales and Northern Ireland FAs feel their participation threatens their individual status within FIFA, world football's governing body.

Wales players were included in Stuart Pearce's squad at London 2012 but there were no Scottish or Irish players involved and Horne told Sky Sports News no British men's team would be entered for the 2016 Games.

"FIFA accepted the position when we were hosting the Games and I think we take that and move on."

The British team, which included Manchester United's Welsh midfielder Ryan Giggs and Craig Bellamy also of Wales, reached the quarter-finals where they lost on penalties to South Korea.

The women's team entered the Olympics for the first time in London and also reached the last eight, but Horne said there was a possibility a women's team might be entered for the Rio qualifiers.

"We will keep talking to people about that," he said. "We are not ruling it out completely."