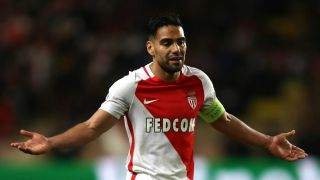 Radamel Falcao has stressed he is happy at Monaco and is keen to stay at the Ligue 1 champions.

The 31-year-old returned to the Stade Louis II this season after underwhelming loan spells with Manchester United and Chelsea and enjoyed a stellar 2016-17 campaign.

Falcao scored 30 times in 43 appearances in all competitions to help Monaco win their first Ligue 1 title since 2000, while also firing them into the semi-finals of the Champions League.

The striker is loving life at Monaco following his resurgence and hopes to remain at the club.

"I still have a contract for one more year.

"It all depends on the directors, but I want to stay if it is up to me."