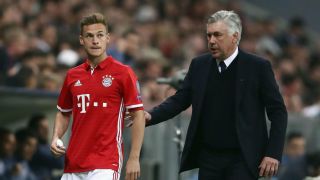 As is now customary at this time of year, Bayern Munich will douse themselves in Bavaria's most famous export as celebrations follow Saturday's match with Freiburg

But, after a fifth consecutive Bundesliga title, the beer might just seem a little flatter than in previous seasons.

Dominating one of Europe's traditional powerhouse leagues to this extent should not be downplayed as anything other than a phenomenal achievement, but the direction of travel of this Bayern side throws up a reasonable share of concerns.

Jupp Heynckes' 2012-13 magnificent treble winners were the ones to apply the stranglehold, responding to back-to-back titles from Jurgen Klopp's Borussia Dortmund and beating their great rivals in the Champions League at Wembley for good measure.

Heynckes' exit was already sealed by that stage to pave the way for Pep Guardiola's arrival, fresh from a year on sabbatical in New York on the back of an era-defining spell at Barcelona.

In light of his glittering career, will admit into its Hall of Fame  May 19, 2017

Although Guardiola was unable to match Heynckes' achievement on the biggest stage and add to his two European titles – three consecutive semi-final defeats to Spanish opposition marked a chastening ordeal – he masterminded Bayern streaking clear of the pack.

A tactically flexible and inventive winning machine on home soil, the Bavarians made the most of Klopp's tenure winding down, aided by their habit of snatching Dortmund's best players as Robert Lewandowski and Mats Hummels followed Mario Gotze across the divide.

Of course, Hummels was a player signed with Ancelotti in mind – a high-grade central defender to help ease this season's transition alongside other seasoned performers, with Guardiola bound for Manchester.

But the thrill around the Bayern squad before the start of the season was the tantalising prospect of how youngsters such as Joshua Kimmich, Kingsley Coman and new arrival Renato Sanches would progress in one of the most well-tooled squads in the game.

The aftertaste of disappointment comes from how they have been consigned to the margins as Ancelotti threw his weight behind the tried and tested performers.

Kimmich's season was a particularly curious one and reaches its conclusion against the frankly bizarre backdrop of Bayern taking legal action against the Stuttgarter Zeitung newspaper for claiming the 22-year-old would leave the club.

"It's a fact I don't want to leave Bayern Munich," Kimmich told reporters when addressing the furore this week. "It's not only conceivable, but it's my goal to stay at Bayern for a long time - under the assumption that I play."

Even allowing for Philipp Lahm's pending retirement, Ancelotti has made this a tough assumption to make.

Arguably the greatest hope of a sublime generation of young German talent, Kimmich opened the season with a surprise scoring streak of four in six games.

Perhaps his versatility as a player adept at right-back, wide or central midfield and even centre-back has acted against Kimmich as he has been restricted to 15 Bundesliga starts.

That's six more than 20-year-old France winger Coman, while Sanches completed 90 minutes for the first time in the 1-0 win over Darmstadt earlier this month. Reports in Spain claim Barcelona might seek to give the Portuguese teenager an escape route

Brazil international Douglas Costa has made 14 starts and nine substitute appearances in the Bundesliga – denied the starring role his dazzling talents suggest he would grasp.

Despite a fallow campaign in front of goal and grappling for his best form, Thomas Muller has been named in the first XI in the Bundesliga once more than Costa and Coman combined.

Mitigation comes in the form of Arjen Robben's evergreen brilliance, Lewandowski's insatiable thirst for goals and the unheralded Juan Bernat establishing himself as a reliable presence at left-back.

Bayern Hall of Fame inductee Lahm and Xabi Alonso will be rightly lauded as they sign off on golden careers this weekend and hopefully Ancelotti, a supreme manager of established greats, can take their departures as a prompt to be bolder with Bayern's stars of tomorrow. Stagnation and success rarely exist alongside one another for long.