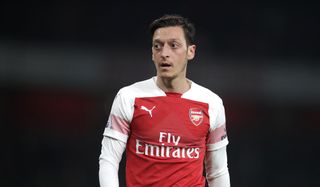 Fenerbahce have distanced themselves from a move for Mesut Ozil and insist they cannot afford to sign the Arsenal forward.

The Turkish Super Lig outfit have been linked with Ozil in recent weeks, with the Gunners reportedly keen to offload the 30-year-old from their wage bill.

That is despite the fact he signed a new deal in February 2018 making him the highest-paid player in the history of the club.

His wage of £350,000 a week eclipses most of players in the current Arsenal squad and could prove a stumbling block in an attempt to move him on, with injury and illness also ruling him out of a number of games over the last couple of seasons.

A deal with Fenerbahce, whether permanent or on loan, was the latest speculation but the club released a statement on Wednesday announcing their finances meant Ozil was not a target.

“In recent weeks, and especially in the last few days, the necessity of providing information about the claims of Mesut Ozil, which is on the agenda, to clarify the situation has arisen,” it read.

“Mesut Ozil, with his career and stance successfully represents our country abroad, is an important value known with the identity of Fenerbahce.

“However, Fenerbahce does not have an initiative for Mesut Ozil. Under the current economic conditions, such a step is not possible for both parties.

“Our President, Ali Koc, made statements in this context during the Win-Win program held on June 20 and emphasised that this could not be realised in the short term. We present it to our community and the public.”

Arsenal are set to head to the United States later in the week to begin their pre-season tour.

Newly-appointed technical director Edu will link up with the squad, with new signing Gabriel Martinelli also likely to be making the journey.

And there could be more transfer activity from the club in the coming days, with Saint-Etienne defender William Saliba reportedly close to sealing a move to the Emirates Stadium.

PA understands that the deal for the 18-year-old, reported to be worth £27million, is yet to be completed with Saliba likely to be loaned back to the Ligue 1 side for next season.