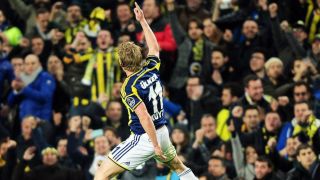 Ismail Kartal's side have not played since their 5-1 Super Lig victory over Rizespor on April 4, when several shots were aimed at the front of their team bus after the match.

As a result the whole league program was suspended last weekend to allow a full investigation, while the cup quarter-final was also rescheduled.

On their return to playing, Fener made a superb start as Dirk Kuyt netted twice before the break, with Hasan-Ali Kaldirim and Caner Erkin's goals securing a semi-final with Bursaspor