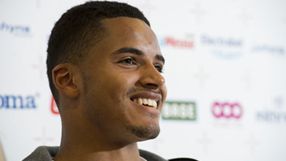 The 20-year-old was out of contract at United in the close season. He looked set to join Tottenham but the deal broke down when the clubs failed to agree a compensation package.

England youth international Fryers then moved to Standard Liege in Belgium but completed a transfer to Tottenham on Thursday, with media reports estimating the fee at £3m.

"We expected that," Ferguson told the United website on Friday. "I think it's a blatant manipulation of the rules.

"Tottenham did nothing wrong as he went to Standard Liege. They tried to buy him off us and we'd been looking for a certain figure - they wouldn't pay it but asked if they could take him down there on trial and at that time he was out of contract in June.

"He went down on trial. They then said they weren't prepared to pay the money and all of a sudden he signed for Standard Liege," added Ferguson.

"We knew immediately and suspected that he would return to Tottenham in January and that's happened," he said as he prepared for his club's FA Cup Third Round tie at West Ham United on Saturday.

INTERVIEW Fryers speaks to FFT about his move to Belgium

Premier League rules say that teams wanting to sign under-23s who have rejected an offer of a new contract must agree compensation with the player's club.

If no compensation fee can be agreed, it is decided by a tribunal. In the case of Fryers, United had been holding out for six million pounds, according to media reports.

The defender was able to join Standard for a smaller fee dictated by the compensation system of world football's ruling body FIFA.

"There's nothing we can do about it but I think that really we should, first of all, register our discontent," Ferguson said. "I think the league should look into it.

"The registration should be stopped until they investigate it thoroughly. There's bound to be a trail, either mobile phones or emails, that could give you the full story.

"I must say I'm disappointed in Tottenham. For whatever reason, a club that size has decided to go down this route."

A Tottenham spokesman told the BBC: "Zeki enjoyed his time at Standard. However when Standard sacked their manager in November Zeki wasn't part of the new manager's plans which he accepts and understands happens in football.

"Unfortunately a combination of this and the fact he had become homesick meant he wanted to return to England.

"His representatives made contact with clubs in England. This afforded us a second opportunity to sign the player and as per FIFA's solidarity contribution mechanism, Manchester United will receive five percent of the transfer fee we have paid," said the Spurs spokesman.