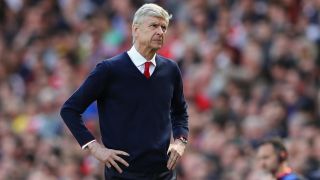 Arsenal manager Arsene Wenger has welcomed support from Alex Ferguson, though he does not expect to match his former rival by reaching 26 years at the Emirates Stadium.

Wenger appreciated the kind words from the Scot and confirmed he was unlikely to match the length of his reign at Old Trafford, an achievement that would require him to stay at the Emirates Stadium for another five seasons.

"No I don't think I will match him on that front," Wenger, who is out of contract at the end of the campaign, said ahead of Arsenal's FA Cup final against Chelsea on Saturday.

"He did extremely well and what he did [with] 26 years is absolutely exceptional because you look at what happens in the game, usually average life expectancy of a manager is 18 months, so our total is quite unusual.

"It is welcome because he knows the difficulty of the job. He is maybe the greatest manager who has worked in England. We had a few big rivalries but time has ended all that and I think we have big respect.

"I have big respect for him and he as well respects what I have done in the game."

Wenger did not give any further hints on his immediate future, insisting he did not know whether the cup final would be his last match in charge of Arsenal.