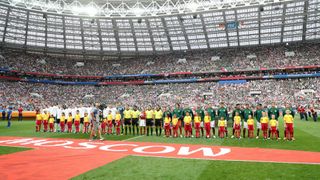 The Mexican Football Federation (FMF) has been fined CHF 10,000 (£7,616) by FIFA in relation to "discriminatory and insulting chants" at the World Cup.

Germany goalkeeper Manuel Neuer appeared to be targeted by allegedly homophobic slurs as he prepared to take a goal-kick in the first half of a Group F encounter in Moscow.

Disciplinary proceedings were opened following Mexico's 1-0 win over the world champions, which came thanks to a goal from Hirving Lozano.

FIFA has now confirmed Mexico have been hit with a fine, although it noted the FMF's efforts in attempting to persuade fans to stop such chants.

"The decision was passed after a thorough assessment of the relevant match reports, the FMF's precedents and the evidence provided, which included videos of the incidents as well as examples of certain sustainable actions taken by the FMF to raise awareness among its supporters," FIFA said in a statement released on Wednesday.

"Moreover, the disciplinary committee gave a warning to the FMF, who may face additional sanctions in case of repeated infringements of this type."

Mexico are next in action against South Korea on Saturday, with striker Javier Hernandez calling on supporters not to use homophobic slurs again.

In addition, FIFA has fined the Serbian Football Association CHF 10,000.

FIFA confirmed the punishment was handed out for the display of an "offensive and political banner" by Serbian fans during their match against Costa Rica.