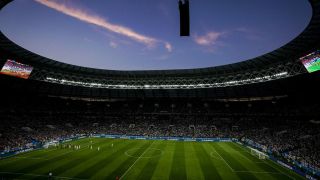 The saying goes 'if it ain't broke, don't fix it'.

It's a phrase that has become particularly pertinent over the last month as a brilliantly bonkers World Cup has played out in front of the eyes of the globe in Russia.

For all the controversy and rigmarole that surrounded the voting outcome of this tournament and Qatar 2022, there can be no denying that the end product has been a glorious cocktail of drama, excitement, surprise and, it wouldn't be football without it, heartbreak.

Big guns like Germany, Spain, Brazil and Argentina were disarmed, hosts Russia defied the odds to reach the quarter-finals, Croatia are shaking off the dark horse tag and England dared to believe it was coming home.

Messi and Ronaldo went home with their Ballon d'Or tails tucked between their legs, Kylian Mbappe has enhanced his reputation as a future great and Luka Modric has come to the fore to show his standing as arguably the best central midfielder on the planet right now.

All of this begs the question, why tinker with a product that continues to produce such scarcely-believable moments of drama?

We now know our FIFA teams...Relive a dramatic couple of days of football here July 12, 2018

From 2026, FIFA president Gianni Infantino will get his wish when football's global showpiece will encompass 48 nations.

Infantino's argument is that by growing the tournament, which has had 32 teams since 1998, football will be boosted worldwide.

The sceptics probably wonder whether the estimated $1billion extra FIFA can expect in additional revenue is actually a much more prominent factor.

Whatever the reasoning, the point remains that the current system is beautifully simplistic, easy to follow and encourages lesser-celebrated nations to take it to the established order of international football.

Iran and Morocco are prime examples of the case in question. Drawn in a group alongside heavyweights Spain and Portugal, given next to no chance of getting out of the group and yet only a lack of luck and hardened knowhow denied them a famous scalp.

Did anyone truly foresee Germany failing to get out of a pool including Sweden, South Korea and Mexico? The reigning world champions falling at the first hurdle for the third straight World Cup.

And the reason we have again been treated to such a stunning tournament is because the format allows it. There is nothing to lose, everything to gain and plenty of reward for endeavour.

If proof were needed that expansion is not the answer you need look back no further than Euro 2016 when 16 teams became 24.

The risk-reward balance shifted to the dark side. Finishing third was, in some cases, enough to reach the knockout stages and meant caution was the ultimate winner.

It led to turgid encounters, bore draws, and teams shutting up shop because the fear of conceding when trying to nick a winner outweighed the desire to take it to the man.

There is the argument put forward by some that opening FIFA's doors wider will lead to more of the feelgood stories like the joyous celebrations that met Panama's shock qualification.

But the reason those scenes are so memorable, so emotive, so instantly viral in this social-media age is because of the fact it is such a monumental achievement to qualify for a 32-team World Cup.

By expanding the format the stories are diminished, the achievements not as grand and, if we're being brutally honest, as great as Panama's qualification was – and it was a truly special moment – they were hardly the greatest advert for expansion.

"If we can say that the World Cup was so successful, it is because of these guys!", and were amongst those praising the FIFA Volunteers for their amazing contribution to the tournament!IG: July 12, 2018

Those in favour may accuse those against of being football elitists, but that argument misses the point that this is the World Cup and is by very definition for football's elite.

It should showcase the globe's best players and teams, whether that be France, Brazil, Mexico, Panama, China, wherever, it doesn't matter so long as the best is on show.

To be a great entertainer you should always leave them wanting more.

Russia 2018 will leave us all wanting more, counting down the days until Qatar in three-and-a-half-years time.

Undoubtedly the World Cup isn't broken. FIFA should stop trying to fix it.