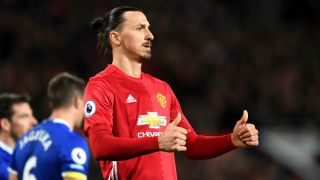 Ibrahimovic suffered the injury during a Europa League clash against Anderlecht last month, prompting some fears it could signal the end of the legendary Swede's career.

Agent Mino Raiola released a statement on Monday that answered those concerns in emphatic fashion, writing: "[Zlatan] will make a full recovery AND HAS NOT SUFFERED A CAREER-ENDING INJURY."

And now Ibrahimovic himself has offered an update on his condition, taking to Instagram to share a determined message about his recovery.

"Fixed, done and stronger," he posted. "Once again thank you for the support.

"We will enjoy my game together soon."

Ibrahimovic has enjoyed a stellar first season at United, scoring 28 goals in all competitions following his move from Paris Saint-Germain.