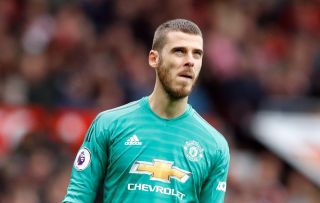 David De Gea has come under close scrutiny in recent weeks after a series of blunders have directly led to goals.

Manchester United boss Ole Gunnar Solskjaer has kept faith with the 28-year-old Spaniard, who retained his starting place in Sunday’s penultimate Premier League game of the season at Huddersfield.

United fans showed their full support for De Gea by chanting his name during the interval at Old Trafford in last week’s draw against Chelsea – just minutes after his error had gifted the visitors an equaliser – and he was given a rapturous welcome by the travelling supporters at Sunday’s game. The United faithful need no reminding of the 28-year-old’s four player of the year awards since 2014.

De Gea has yet to commit himself to United by signing a new contract offer and has reportedly got until the end of the season to make up his mind. But his recent lapses and speculation over his future do not appear to be affecting him. His demeanour at kick-off and throughout the match was of someone in tune with his team-mates and fully focused on his job.

Huddersfield spent long periods without the ball and created few chances, leaving De Gea with very little to do for long periods. When he was first called on in the 39th minute, he made an excellent save with his legs to deny Karlan Grant and pulled off a similar crucial save from the same player in the 89th minute. He was given little chance of keeping out the equaliser from Isaac Mbenza, who fired the ball through his legs.

A big save from David! #MUFC's no.1 reacts well to thwart Grant — still 1-0 to the Reds with five minutes to go in the first half. #HUDMUNhttps://t.co/IhNfKdNMLq— Manchester United (@ManUtd) May 5, 2019

De Gea proved there is nothing wrong with his concentration levels. Having barely touched the ball throughout the first half, the Spain international produced a lightning-quick reaction to flick out one of his long legs and keep out Grant’s shot. Early in the second half he showed no hesitation when sprinting clear of his penalty area to clear the danger and slam the ball into touch.