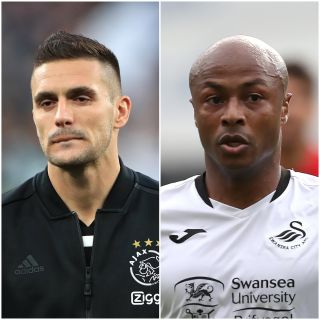 Pep Guardiola‘s desperation for a left-back could see Manchester City go after Nicolas Tagliafico in January. The 28-year-old has impressed in recent years at Ajax and had been considered as an option at the Etihad during the summer. The Sun reports City will make a move for the Argentina defender, who is valued at about £20 million, but face competition from local rivals Manchester United, Arsenal and Chelsea.

West Brom and Brighton are among the teams considering a late move for Swansea forward Andre Ayew. The Daily Mail reports Ghana’s 30-year-old captain, who has Premier League experience with the Swans and West Ham, could be snapped up by one of of the clubs before Friday’s domestic transfer deadline.

Mesut Ozil has rejected a move that would have seen him leave Arsenal, where he has become unwanted under Mikel Arteta. The Daily Express, which references Argentina’s TYC Sports, reports the former Germany midfielder was not interested in leaving the Emirates to go to Saudi Arabia and join Al-Nassr.

The Daily Star says Manchester United are considering taking on Real Madrid for the signature of talented teenager Eduardo Camavinga. The 17-year-old has impressed for Rennes in Ligue 1 and scored on debut for France against Ukraine last week. The Star cites Spain’s AS as reporting United have “put in place a mechanism” to secure the central midfielder as a replacement for Paul Pogba, when the younger player’s contract expires in France in 2022.

Said Benrahma: The 25-year-old Algeria striker’s shift from Brentford to West Ham may not proceed due to the Hammers instead pursuing Bournemouth’s 28-year-old Norway forward Josh King, according to the Mirror, which adds Crystal Palace could bid for Benrahma.

Robinho: The Manchester Evening News reports the former Manchester City and Brazil forward, 36, has said he is willing to be paid just £200 per month when he returns to Santos for a fourth stint.