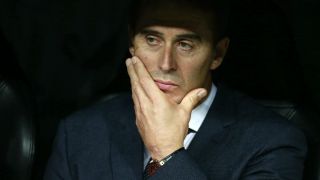 After appointing Lopetegui on the eve of the World Cup, Real Madrid's 5-1 loss to Barcelona on Sunday was reportedly more of an excuse than a breaking point for Perez.

There were reports the decision to sack Lopetegui was made following his side's defeat to Levante last weekend.

Real Madrid released a statement to confirm the termination of Lopetegui's contract, criticising him for failing to maximise a talented squad with eight Ballon d'Or nominees.

However, Calderon suggested Perez is at fault and not the outgoing coach.

"Unfortunately it's another one of the president's whims," Calderon said. "If he was the right man in June, only four months ago, he cannot be unfit now.

"He signed him just two days before the World Cup started, so damaging our national team and now he's sacking him. So that's the problem, I think he (Lopetegui) is not to be blamed."

Calderon was also critical of the decision to sell Cristiano Ronaldo to Juventus at the end of last season.

"That has been the main problem, to transfer Cristiano in June has been a historic mistake and we are paying for that now."

Having initially replaced Perez, Calderon was club president at the Santiago Bernabeu between 2006 and 2009, before Perez reclaimed the position he has held since.