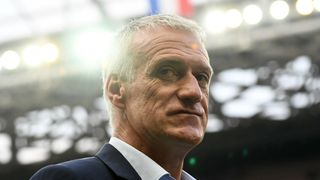 Didier Deschamps suggested a week of heavy training caused France's lacklustre showing in the 1-1 draw against the United States.

Les Bleus began promisingly in Lyon, with Paul Pogba having a shot tipped against the post by Zack Steffen in the USA goal.

Yet a rare attack from the visitors in the 44th minute brought the opening goal, with right-back Djibril Sidibe and goalkeeper Hugo Lloris both culpable as Julian Green pounced.

Kylian Mbappe impressed throughout and levelled from substitute Benjamin Pavard's fine cross 12 minutes from time – one of few incisive France attacks during the second period until a late rally that saw Steffen excel.

You already knew. But we're confirming that is indeed MOTM. June 9, 2018

"It's always better to win, but it's a preparation match," Deschamps told TF1.

"We missed a little bit of juice against a USA team that left us with few spaces.

"We had trouble in the first 20 minutes of the second period, but at the end we took over again.

"We had a week of heavy workload. Now we will switch to our match against Australia."

Deschamps maintains his gifted squad are well prepared for that opening World Cup fixture in Group C, but offered no guarantees the XI he selected at the Groupama Stadium – featuring Paul Pogba roving in midfield and a front three of Antoine Griezmann, Olivier Giroud and Mbappe – would remain in Kazan.

"I played a maximum of players in all three games, it also gives us lessons," he added.

"I hope they will be physically ready for me to be spoiled for choice. It will not necessarily be the same [team], no."