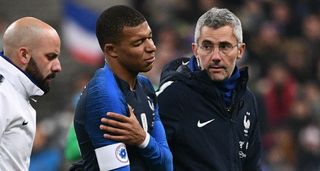 Paris Saint-Germain may have been dealt a huge blow after Kylian Mbappe suffered a shoulder injury in France's friendly against Uruguay.

Mbappe sustained the problem 30 minutes into Tuesday's encounter at Stade de France, landing awkwardly on his right side after a challenge from Uruguay goalkeeper Martin Campana.

The 19-year-old, who has 13 goals in all competitions for Ligue 1 leaders PSG so far this term, attempted to carry on, but promptly signalled to the touchline that he needed to be replaced, with Florian Thauvin replacing the forward following a spell of treatment.

And with Mbappe's PSG team-mate Neymar having also gone off injured in Brazil's clash with Cameroon, Thomas Tuchel will be concerned over the status of his star men ahead of a busy run of fixtures which includes the Ligue 1 champions' crucial Champions League meeting with Liverpool in eight days' time.

36' First substitution for Les Bleus goes off with an injured shoulder comes on in his placeHope it's nothing serious, Kylian! November 20, 2018