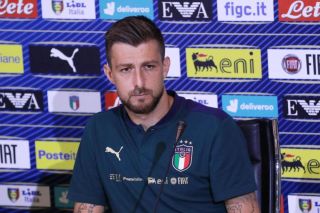 Lazio defender Francesco Acerbi is hoping Italy can deliver a memorable return to the Stadio Olimpico with victory over Greece to secure a place at Euro 2020.

The Azzurri have a perfect record in Group J so far, with six straight wins putting Roberto Mancini’s men clear ahead of Iceland at the top of the table.

Another victory in what will be a first senior international match played at the Stadio Olimpico since October 2015 would guarantee qualification for next summer’s tournament, set to open in Rome on June 12.

A sell-out 40,000 crowd is expected on Saturday night, when Acerbi hopes to make full use of home advantage.

“It’s a big occasion, the Azzurri’s return to Rome,” the 31-year-old centre-back said. “We are expecting a lot of fans.

“We are excited to play in Rome and are hoping to entertain the people by securing qualification.

“It will be a beautiful setting – and putting on the Azzurri shirt in the stadium of the city in which I play for my club is just an extra source of emotion.”

Acerbi rejected suggestions Italy had found themselves in one of the less tough qualifying groups.

“Winning is never easy,” he said, quoted on www.figc.it. “We may be better than other teams on paper, but you always have to prove it on the pitch.

“If you get results like these it doesn’t mean that there is a lack of quality in the group.”

Acerbi, who has fought his way back to play at the highest level after being diagnosed with testicular cancer, is expected to make Saturday’s starting XI alongside Leonardo Bonucci.

Lazio striker Ciro Immobile could, meanwhile, be deployed on his home ground.

While Mancini’s squad look well set on the path to making an impact at Euro 2020, Greece remain very much a work in progress.

Greece, surprise winners of Euro 2004 in Portugal, have seen their qualification hopes hit following three defeats and just one victory.

New head coach John Van’t Schip caused a stir by leaving out central defenders Sokratis Papastathopoulos and Kostas Manolas, as well as Benfica midfielder Andreas Samaris – part of 14 changes from the last squad with a look towards the future.

Former Holland international Van’t Schip, though, believes the long-term target of reaching the World Cup is a realistic goal.

“Our project requires time, confidence and support. We should be judged in two years,” he said, quoted on the Hellenic Football Federation website.

“Taking into account the team’s current status in Euro 2020 qualifying and the importance of the Nations League and 2022 World Cup qualification campaign, we decided to launch our ‘Qatar Plan’ project now.”