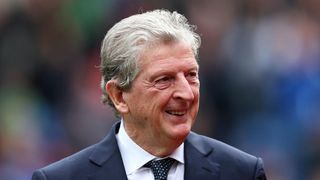 Roy Hodgson sees parallels between Crystal Palace's struggles and the situation he faced at Fulham, meaning he will not panic ahead of a tough run of Premier League fixtures.

Former England manager Hodgson succeeded Frank de Boer at Selhurst Park last week, but Palace remain without a point or a goal after five matches this season, sitting bottom and already four points away from safety.

Hodgson has been in a similar position before, though, saving Fulham from relegation on the final day of the 2007-08 season after a difficult start.

And the veteran manager is confident he can also revive Palace's fortunes, despite their next four league fixtures coming against Manchester City, Manchester United, Chelsea and Newcastle United.

"We lost the first three [at Fulham]," he said. "It was a similar sort of thing: Arsenal, those type of teams.

"Don't forget, at Fulham, we got out of the relegation zone on the very, very last game of the season with a win at Portsmouth, so we lived with that hanging over our heads for a very long time - and we were greatly helped by the fans.

"The fans [at Palace] at the moment still believe this is going to change overnight and are beginning to realise it won't.

5 - Crystal Palace are the first side in English top-flight history to open the season with five defeats and no goals scored. Woe. September 16, 2017

"I've obviously been told from the club's point of view that survival's everything, that it would be unthinkable that we go down - and we're going to work during the months ahead to make sure it doesn't happen."

"But I still think we will be OK and we'll work to be OK. This group of players will follow me and the others to make sure we're OK.

"But it won't be by the end of October; possibly, it might be quite a long way forward."