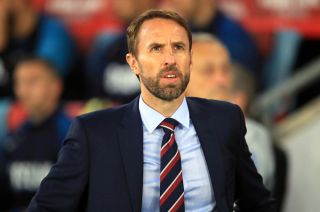 England manager Gareth Southgate believes he has enough attacking talent at his disposal to not have to rely on one or two key players heading into next summer’s European Championships.

Victory against the Czech Republic in Prague on Friday night will assure the Three Lions of their place in the tournament – where the group stage, semi-final and final will take place on home soil at Wembley.

England have blown away their Group A competition so far, scoring 19 goals from four qualifiers – including a 5-0 victory over the Czechs in March.

In high spirits at our final session at @StGeorgesPark! 😃— England (@England) October 10, 2019

Raheem Sterling scored a hat-trick that day, while Harry Kane took home the match ball following a 4-0 win against Bulgaria.

While the pair will obviously be key to any hopes of success next summer, Southgate feels he has plenty of other options should something go awry between now and then – with Marcus Rashford, Callum Wilson and Tammy Abraham also in the squad and other young talent waiting in the wings.

“We’ve got Callum Hudson-Odoi coming through and other players are emerging so quickly,” he said.

“You’ve got Bukayo Saka at Arsenal just dipping his toes in the first team as well. So, we’ve got really good players, we need more than three.

“I’ve always said that in tournaments that I played in, we always pinned our hopes on one player or two players.

“So, I don’t think it matters what our starting three is. Clearly, at the moment Raheem and Harry, their numbers are incredible and the consistency of their performance is, but the rest can be down to performance at any given time.

“And how we see the guys in training and their physical level. These guys know that Tammy coming through is going to push that. Callum Wilson is going to want to push – we can try to motivate the players but that competition for places is as much as a driver than anything else.”

Sterling was also speaking ahead of Friday’s qualifier at the Sinobo Stadium – home of Slavia Prague – and the Manchester City forward insists England must show similar attacking ability on the bigger stages of tournament football if they are to be considered among the best in the world.

“I think that there are a lot of great front threes in the world,” he said.

“They’re all players that are still getting better, still learning, but at the same time are producing as well, so, yes, it’s an exciting front three.

“But you know, we’ve got to do it in big games, big tournaments. That’s when we’ll be judged if we’re a great front three or not.”

England are starting to build a strength in depth that is the envy of many a nation.

Such quality means in-form Leicester midfielder James Maddison arrived at his third international camp without a cap to his name – a wait that will continue after having to return to his club on the eve of the Czech Republic clash.

“He still had a bit of the ankle problem that he had pre the Liverpool game with Leicester.

“And then he has fallen ill over the last couple of days, so he wasn’t going to be able to train and we decided the best thing was to send him back to his club.”

Asked if he had a chance he could have played a part against the Czechs or Bulgaria, Southgate said with a laugh: “Not looking at how he was this morning, no!

“Again, no point travelling with the rest of the team ill as well, so that was one of the issues.

“But he hasn’t trained all week, he wouldn’t have trained until Saturday at the earliest and I don’t think he’d have been in a fit state for Monday.”