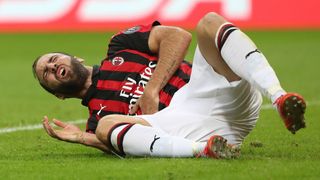 Gonzalo Higuain could miss AC Milan's Serie A game against Empoli due to injury, head coach Gennaro Gattuso has confirmed.

Higuain, who joined from Juventus in a deal that saw Leonardo Bonucci return to the Italian champions, has scored in three consecutive appearances.

The Argentina striker is a doubt for Thursday's game at Empoli, although Patrick Cutrone could return to the squad after almost a month out.

Milan are also set to be without centre-back Mattia Caldara, who also joined the Rossoneri as part of the Bonucci deal with Juve.

"His flexor tendon was bothering him, it's an old scar," Gattuso told a news conference of Higuain. "We'll see if he's fit to play.

"It's the first day [Cutrone] is back in training with the rest of the group. He tried changes of direction this morning and it all went well. We are pleased because it's important to have him back.

"[Caldara] has a slight groin injury. He's feeling better and he was back running [on Wednesday]. It's just an inflammation in his groin."

Our 24-man squad to travel to Empoli: Cutrone is back, Caldara still outI 24 convocati per : torna Patrick, ancora fuori September 26, 2018

Milan have drawn their last two Serie A games, Atalanta earning a point at San Siro on Sunday thanks to a 91st-minute goal by Emiliano Rigoni.

"These are moments when you have to set anger aside, you need calmness and to talk the least amount possible," Gattuso added.

"It's true we are leaving some points on the table, but we are playing well and not everything should be dismissed.

"If we analyse the matches we could have won or lost them all, this makes you understand the situation, we must be more concrete. When we don't feel at ease is when our worst side comes out.

"We are lacking confidence, we start doubting ourselves and we start fearing we won't bring the result home.

"Today we are not a great team, we are a team that plays well, but still has many flaws to correct, but we have little time left."