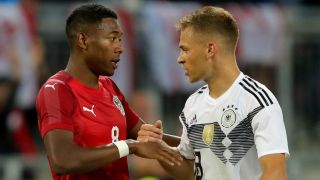 Bayern Munich's Germany internationals will not suffer from a World Cup hangover after their early exit in Russia, according to David Alaba.

Joachim Low's squad travelled to the tournament with high hopes of retaining the trophy they won in Brazil four years ago, only to surprisingly fall at the first hurdle.

A dramatic win over Sweden was sandwiched between shock defeats to Mexico and South Korea, meaning the reigning champions finished bottom of Group F.

Asked if Germany's disappointing campaign will have a knock-on effect at Bayern, Alaba replied: "I don’t think so, because you cannot compare national teams with clubs.

"We have a great squad at Bayern Munich and our German players are very important for us – we know their qualities and they are hungry for success.

"I'm sorry for them after what happened [at the World Cup], but this pre-season we will work together to try and reach our goals for the new season."

Robert Kovac put the boys through their paces in training todayJuly 12, 2018

While Germany have long since returned home, the Bundesliga champions will maintain their record of having a player involved in every World Cup final since 1982 thanks to the presence of France's Corentin Tolisso.

There will also be a familiar face in the opposition too, with ex-Bayern forward Mario Mandzukic crucial to Croatia's unlikely march to Moscow.

"It's a very nice story for Croatia," Alaba said. "The World Cup has been very crazy – no one expected them in the final."

On former team-mate Mandzukic - who scored the extra-time winner in the semi-final against England - Alaba added: "With Mario, I had a great time with him in Munich. I’m happy for him."

Alaba's focus is on club duties with Bayern back in training ahead of a pre-season tour to the United States.

"For me, and also for the team, this tour is very important," Alaba enthused.

"We are thankful for our support in the United States. My experiences in the past were all very good – we are looking forward to this tour."