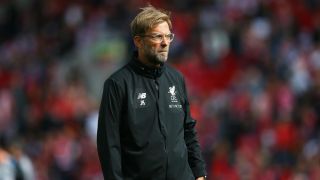 Liverpool legend Steven Gerrard insists he has total faith in manager Jurgen Klopp's ability to bring success to the club.

The Reds are seventh in the Premier League, seven points adrift of leaders Manchester City, having won only three of their opening seven games.

A 1-1 draw away to Newcastle United on Sunday means the Anfield club have earned just one victory in their last seven games in all competitions, while they have not kept a clean sheet since the 4-0 thrashing of Arsenal on August 28.

Pressure has begun to build on Klopp in the wake of recent results but Gerrard is adamant the team are making great strides under the former Borussia Dortmund boss.

"The league doesn't lie: Liverpool are where they are," Gerrard, who made 710 appearances for the club, told Sky Sports News. "But what I would say is I am really enjoying watching the team at the moment.

"I love the manager. I think he has taken this team and the club forward. There is a lot of excitement about.

"But we are seven games in and Liverpool are capable of going on a long run of winning games.

"I am very, very confident that this season can be a success, whether that be in the league or in Europe or the FA Cup. I am a big, big believer in this manager."

Liverpool face a daunting run after the international break, with a home match against Manchester United followed by trips to Maribor in the Europa League and Tottenham in the top flight.

But Gerrard believes it is in the big games that Klopp's side show their true ability.

"I cannot wait for those two games because, watching Liverpool since Jurgen has come in, they are the games where Liverpool seem to prove everyone wrong and put in top-class performances," said the former England captain, now coach of the Reds' academy side.

"I think their record against the top sides is the best so if I was a Liverpool player or the Liverpool manager, those games can't come quick enough.

"The frustrating thing for Liverpool at the moment is the international break after a couple of games where they feel they should have done better.

"I think Liverpool will be itching once the international break is over and really relishing those games. With one good result or a couple of good results, they will find themselves back in the top four."