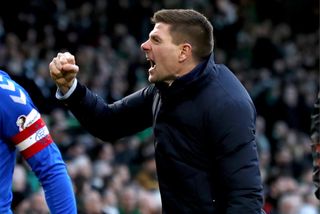 Rangers boss Steven Gerrard has called on the Ibrox support to roar his players through their gruelling title-race schedule.

Gerrard’s side return to Ladbrokes Premiership action for the first time since their Celtic Park triumph when they host St Mirren on Wednesday night.

But the second half of the campaign is set to test their stamina levels to the maximum.

As well as their Buddies clash, Rangers also have another 14 games – nine in total at home – crammed into an eight-week period leading up to the next international break.

That hectic calendar could become even busier if they progress past Braga in the Europa League and Hamilton in the Scottish Cup.

🗣️“We are certainly going to need our fans to get behind us and make some noise, and hopefully we can get right back into our rhythm and build on the last league performance.”— Rangers Football Club (@RangersFC) January 21, 2020

The Englishman – who has axed Eros Grezda and Andy King this month while also allowing Jamie Murphy and Jamie Barjonas to leave on loan – is confident he has the numbers in his squad to cope with their exhausting programme.

But he wants the Rangers faithful to do their bit to help his team by pumping up the volume levels.

He said: “We had a six-week block before the break where it felt we were away for the majority of it.

“We now need to make the most of Ibrox and we’ll certainly need our fans to make some noise.

“Hopefully we can get back into our rhythm and build on our last league performance.

“Our next midweek off isn’t until the next international break and if we can perform like we are capable against Braga then there could be more fixtures in the pipeline. There’s also the Hamilton game in the cup.

“It’s what we’re used to and I think that’s when we’re at our best.

“It’s an exciting time, the players look ready and hopefully they can perform (on Wednesday night) against St Mirren.”

Rangers sit two points behind Neil Lennon’s Hoops but have a game in hand.

A date has yet to be set for the outstanding fixture with St Johnstone and they might be forced to wait until after the league split to play the clash with Tommy Wright’s team if they continue to march on in Europe and the cup.

But the threat of a fixture pile-up is a worry for another day, according to Gerrard.

“There’s no confirmation on the St Johnstone date, we’re still waiting for news on that,” he said. “It is what is. We’ll handle whatever comes our way in terms of what date is announced for that fixture.

“It’s out of our control and we are waiting to find a space for it.”

Time on the training pitch will be limited in the weeks to come but Gerrard made sure his team got themselves ready for Saints during their winter training camp in Dubai.

He said: “We’ve had a lot of time to prepare. We didn’t just prepare for last Friday’s game with Stranraer over the last couple of weeks.

“We’ve been preparing in a certain way, trying to foresee what kind of tactics we’re going to come up against, certainly at home.

“Listening to what *St Mirren boss) Jim Goodwin has said, they’re going to be very organised, compact, hard to beat and very stubborn like they were at the game in Paisley (1-0 on August 25). We needed a moment of magic from Borna Barisic that day.

“We’ve had enough training time, the players know exactly what they need to do and how they need to approach it. Now they just need to execute the game-plan we’ve given them.”