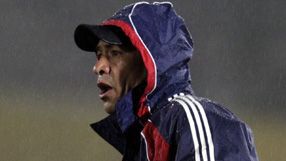 Ambriz, who quit immediately on being told he would not be retained after the Clausura championship, has presided over a run of six defeats in the league and Libertadores Cup including Tuesday's 5-0 rout away to Ecuador's Deportivo Quito.

"The firm responsible for the Chivas sporting project, headed by Johan Cruyff, determined that Ignacio Ambriz should remain in his post until the tournament concludes," Guadalajara said in a statement.

This effectively amounted to the two remaining matches in the league phase of the championship from which only the top eight go through to the knockout rounds for the title. Chivas are 14th with their qualifying chances hanging by a thread.

"However, on being notified of the decision, Ambriz decided to decline that plan and opted to leave the coaching position," the club added.

Cruyff was appointed as the club's consultant in February and his arrival gave the Chivas a boost, ending a run of seven matches in which they only took two points as they embarked on a five-match unbeaten streak that included four victories, but the effect has worn off.

Ambriz took charge in January after Fernando Quirarte resigned following a run of three defeats, Guadalajara's worst start to a championship. He leaves with a record of four wins and three draws in 12 league matches.

"Johan Cruyff Football will bring in a new trainer to work with the objective of playing the most competitive football. The new coaching staff will be named and officially presented in May," Guadalajara said.

Guadalajara are Mexico's most popular and successful club with 11 league titles, their last in the 2006 Apertura, first of two championships in the Mexican season.