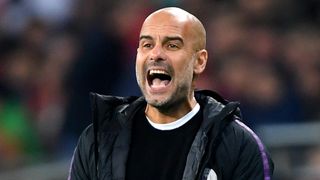 Manchester City manager Pep Guardiola has no doubt there are five teams in contention for the Premier League title.

City and Liverpool have been talked about as the major threats to win the title this season, and the duo are two points clear at the top.

However, Chelsea, Arsenal and Tottenham are all within two points after nine games this season.

As his side prepare for a trip to face Spurs on Monday, Guardiola said it was a five-team race for the Premier League title.

"I don't have doubt about that. There are just two points difference between four, five or six teams. They're all so strong," he said.

Pep on whether the Wembley pitch will play a role in his team selection on Monday night... Presented by  October 26, 2018

"You see the line-up – the first 11, 12, 13 players from Tottenham for the last five or six years, Tottenham are always up there.

"Obviously they cannot invest in players because of their incredible stadium that cost a lot of money. They're a top side. I've said that from my first year here.

"They were my first defeat here and I realised how strong they are. Last season we did really well in both games, but they've got a good manager [Mauricio Pochettino] and good players."