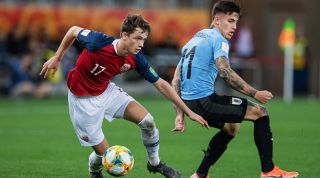 According to the Daily Mail, the two Manchester clubs are both keeping tabs on the talented teenager.

The central midfielder is a highly-rated prospect who has been linked with several major European clubs in recent months.

Evjen plays his club football for Norwegian side Bodo/Glimt and has also impressed while representing his country's Under-20 side.

Both United and City have identified the 19-year-old as a potential target when the Premier League's transfer window reopens in January.

The two clubs sent scouts to watch Evjen, who has scored nine goals and provided four assists in 18 appearances this season, in his team's 3-1 victory over Stromsgodset last month.