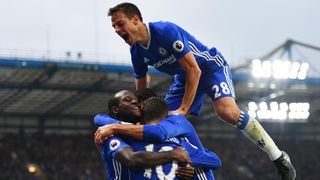 Chelsea's fifth Premier League title triumph was confirmed on Friday as they dispatched West Brom after overcoming some stubborn resistance at The Hawthorns.

The 1-0 victory ensured the Blues' lead at the top over Tottenham is insurmountable and means they can celebrate being champions of England for the sixth time in their history.

Antonio Conte's side have led from the front for so long their success has had an air of inevitability for some months, although the Italian's tricky start to life in England should not be forgotten.

There have been many crucial steps on the road to glory but we've narrowed things down to five pivotal matches.

A devastating first-half display from Arsenal at Emirates Stadium propelled the Gunners into an early title challenge and left Chelsea fans feeling wretched.

Alexis Sanchez, Theo Walcott and Mesut Ozil all scored before the break to leave the visitors winless in three games and with an eight-point deficit to early leaders Manchester City after only six matches.

It seems counterintuitive to choose a defeat like this as a vital moment in a title win, but this game proved to be the final straw for Antonio Conte's experiment with a back four.

For the next game away to Hull City, the Italian reverted to the 3-4-3 set-up that brought him such success with Juventus. Chelsea won that game 2-0, and every match afterwards until January 4.

It hurts a lot to be dropping points again but we must stand up strong and learn from our mistakes.+Thank you so much for the love. September 17, 2016

Although arguably their best home performance of the season would come two weeks later in a 5-0 thrashing of Everton, this result went a long way towards banishing memories of last season and instilling real hope of an assault on the summit.

Jose Mourinho's return to Stamford Bridge, less than a year after his dismissal in a dreadful campaign for the Blues, ended in utter humiliation from start to finish.

Pedro opened the scoring after 30 seconds and Gary Cahill made it 2-0 before the break, before superb solo efforts from Eden Hazard and even N'Golo Kante completed the rout.

Mourinho had been taunted by home fans throughout and took exception to Conte's exuberance on the touchline in the closing stages, his mood only enhancing the scenes of celebration around the Bridge.

Congratulations to , who has been voted the 2017 Footballer of the Year by the Football Writers' Association!   May 8, 2017

Tottenham came into this match smarting from a Champions League group-stage exit but looked determined to preserve their unbeaten start to the league campaign.

Indeed, Mauricio Pochettino's side were dominant from kick-off and took the lead through a fine Christian Eriksen goal 11 minutes in, with a first win at Stamford Bridge since February 1990 looking firmly on the cards.

But Chelsea, who dug out a 1-0 win away to Middlesbrough the week before, once again found the response when they needed it. Pedro equalised against the run of play with a brilliant strike before the break, and Victor Moses - a standout star of the season as a whole - blasted in the winner via deflections from Hugo Lloris and Jan Vertonghen early in the second half.

The win put them back to the top of the table and opened up a seven-point gap to Spurs that would never be completely closed.

Amid their more impressive performances, this was a victory gained as much through battle-scars as footballing brilliance.

The match looked destined to finish as a draw before Cahill made amends in the 87th minute, scoring from a corner to seal a 20th win from 23 matches in all competitions.

The result put the gap to second-place Tottenham at 13 points with 10 games left and had Conte's side truly believing that the title was within their grasp.

It was billed as the last major stumbling block on Chelsea's road to the title but, in the end, they barely broke their stride.

A defeat to Ronald Koeman's in-form side would have left Tottenham knowing that a win against Arsenal in the derby later in the day would cut the gap at the top to one point with four games to play.

The scores were deadlocked for over an hour before Pedro, not for the first time, struck a brilliant goal from distance before Gary Cahill and Willian made the result safe at Goodison Park.

Spurs went on to beat Arsenal 2-0 but it made little difference, with Chelsea knowing that nine points from remaining matches against Middlesbrough, West Brom, Watford and Sunderland would see the blue ribbons tied to the trophy. Tottenham's loss at West Ham saw that timescale shorten, leading to Chelsea's coronation in the West Midlands.

. has won the Premier League’s Goal of the Month award for the second time this season with this beauty against Everton!   May 12, 2017