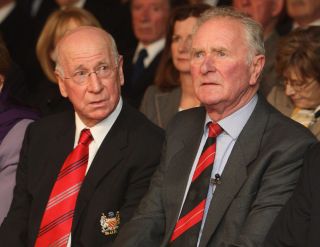 Sir Bobby Charlton and Sir Alex Ferguson have led the tributes to former Manchester United and Northern Ireland goalkeeper Harry Gregg, who has died at the age of 87.

Gregg was hailed as a hero of the Munich air disaster on February 6, 1958, in which 23 people were killed. He was a survivor and twice returned to the burning fuselage to drag team-mates and strangers to safety.

He rescued United team-mates Charlton and Dennis Viollet from the BEA Flight 609, as well as a 20-month-old baby and her badly injured, pregnant mother.

In nine years at United, Gregg played 247 times, including, incredibly, a 3-0 win over Sheffield Wednesday just 13 days after the Munich tragedy.

Charlton said in a statement on United’s website: “Lady Norma and I are deeply saddened to hear of the passing of Harry Gregg.

“I was proud to call him a team-mate. For all the matter of fact things Harry said about that night in Munich, for me, he will always be remembered as a heroic figure. It’s incredible to think that he went on to play in a match against Sheffield Wednesday just 13 days after that tragic night.

It is with great sorrow that we inform of the death of Manchester United and Northern Ireland legend Harry Gregg, OBE,…

“A shining light both on and off the pitch. For so many reasons, he deserves to be remembered as one of the greatest names in Manchester United’s history. Harry will be deeply missed and our thoughts are with Carolyn and his family at this very sad time.”

Ferguson, who took his United team to play in Gregg’s testimonial in Belfast in 2012, said: “I was deeply saddened to hear of the passing of Harry Gregg.

“Harry was a man of great character and a true legend at our club. I remember that he was always very excited and proud to host our youth team at his boarding house for the Milk Cup every summer, so he could recount the tales of his playing days. I loved his company and the many pieces of advice he gave me.

“My thoughts and prayers are with Carolyn and his family at this very sad time. God bless Harry.”

United also remembered Gregg, saying in a statement on its website: “It is with deepest sadness that we have learnt of the passing of former player Harry Gregg OBE.

“After the disaster, he was integral to the rebuilding of Sir Matt Busby’s team and he remained a cherished part of the Manchester United family for the rest of his life.

“Harry’s contribution to the United story could never be underestimated. The affection in which he was held by generations of supporters was immense and, although it has been said many times before, we will not see his like again.

“In short, he was, without question, one of the great figures in United’s history and his name and deeds, both on and off the field, will always be remembered and revered. The thoughts and prayers of everyone at the club go out to Harry’s family and friends.”

It is with deepest sadness that we have learned of the passing of former player Harry Gregg OBE. The thoughts and prayers of everyone at the club go out to Harry’s family and friends. pic.twitter.com/5kjlpn5Wqm— Manchester United (@ManUtd) February 17, 2020

Gregg became the world’s most expensive goalkeeper when Sir Matt Busby’s United spent £23,000 in 1957 and he was voted the best at the World Cup a year later.

He won just 25 caps for his country during an international career that was hampered by injury.

Irish FA president David Martin said today: “Everyone at the association and in the Northern Ireland football family is saddened to hear of the death of Harry Gregg.

“He was one of the greatest and most famous players to come from our country and, of course, he was one of the heroes of Northern Ireland’s famous 1958 World Cup squad.”

Irish FA chief executive Patrick Nelson added: “Harry Gregg was a true legend of the game…he will be missed by all of us.”

Harry Gregg | A true legend of the game for both NI and @ManUtd 💚 One of our star men at the '58 @FIFAWorldCup, and the courageous, reluctant hero of Munich #MUFC#HarryGregg— Northern Ireland (@NorthernIreland) February 17, 2020

Gregg had spells with Windsor Park Swifts, the reserve team of Linfield, and his local club Coleraine before moving to England to sign for Doncaster at the age of 18.

He played for Rovers between 1952 and 1957 and the club tweeted: “The thoughts of everyone at #DRFC are with the friends and family of Harry Gregg, who made 99 appearances for Rovers before being signed for Manchester United by Matt Busby in 1957 and becoming a hero of Munich. RIP, Harry.”

When he retired from playing, a managerial career followed with spells in charge of Shrewsbury, Swansea, Crewe and Carlisle.

The Cumbrian club tweeted: “He was the Hero of Munich – returning to the plane repeatedly to help others in what he described as a ‘spur of the moment’ action. Thoughts with the family and friends of former manager Harry Gregg this morning.”

RIP Harry Gregg. Our thoughts and prayers are with you. The #ManUtd family pic.twitter.com/3ayIli8ekY— Mike Phelan (@Mike_Phelan_1) February 17, 2020

United assistant manager Mike Phelan wrote on Twitter: “RIP Harry Gregg. Our thoughts and prayers are with you”.

“Harry Gregg what a man we love you Sir RIP. As a 15 year old boy Harry came to visit me in hospital in Manchester to make sure I was in the right hands of Manchester United ?? What a man ?? RIP”, tweeted Whiteside.

Former United forward McClair wrote: “A few months ago, I had the privilege of visiting Harry Gregg at his home. He showed me his astonishing collection of memorabilia.

“We sat in his front room and I listened to Harry’s tales, some sad, many of them joyous. I was blessed that day. Deepest condolences to his family.”