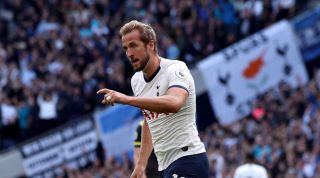 Barcelona are beginning to plan for a future without Luis Suarez, and both Harry Kane and Marcus Rashford are in the frame to replace him.

Suarez's contract expires in June 2021, by which time he'll be 34. According to Mundo Deportivo, the English duo are being considered at the Camp Nou.

Kane heads up the wishlist alongside Kylian Mbappe, with Barcelona unfazed by the potential transfer fee place on both players' heads.

Daniel Levy has reportedly placed a £250m price tag on Kane, while Mbappe wouldn't go for anything below the £166m PSG paid to Monaco.

With Spurs struggling so far this season, questions have been raised as to whether or not Harry Kane should leave the club if he wants to win silverware.

Both Glen Johnson and Rio Ferdinand have said that Kane should be willing to look beyond north London, as has former Spurs striker Dimitar Berbatov. Kane himself said back in March that he is willing to stay at Spurs so long as they show ambition.

Marcus Rashford may be a more surprising name on the list, particularly given his current struggles at Manchester United, but it's reported that he is thought of more highly at Barcelona than another potential replacement in Liverpool's Roberto Firmino.

The fourth name linked is Inter Milan's young Argentine forward Lautaro Martinez, who reportedly has a release clause of somewhere in the region of £98m.

The striker is well known and highly regarded by Lionel Messi, so much that the Barça icon has yet to retire from international football so that he may help bring Martinez through on the international scene.

Martinez has also shown Barcelona what he can do directly, scoring against them in the Champions League this season.