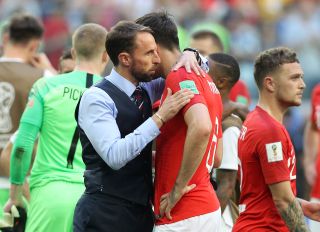 Harry Maguire has been named in the England squad despite his ongoing court case in Greece, while Gareth Southgate has handed uncapped Mason Greenwood, Phil Foden and Kalvin Phillips their first call-ups.

It has been nearly 10 months since the Three Lions boss last named a squad, but there have been tough decisions to make right up until Tuesday afternoon’s selection.

The inclusion of Maguire has been the main talking point, with the Manchester United captain subject of an ongoing hearing in Greece following his arrest in Mykonos in the early hours of Friday morning.

But the defender has been selected and is joined in the 24-man squad to face Iceland and Denmark in the Nations League by teenage team-mate Greenwood, whose fine breakthrough season has led to a first call-up.

Manchester City playmaker Foden has also been brought into the senior squad for the first time along with Leeds defensive midfielder Kalvin Phillips after impressing for the Sky Bet Championship winners.

Danny Ings’ fine form for Southampton has seen him called up for the first time since making his debut in 2015, while Kyle Walker has been recalled having not played for England since the Nations League finals last June.

City team-mate John Stones has been left out of the squad, but Raheem Sterling got the the nod despite questions over his availability.

There is no place for Callum Hudson-Odoi, Fikayo Tomori, Danny Rose and Callum Wilson having been in the squad to face Kosovo in November, while Ross Barkley and Fabian Delph are also conspicuous by their absence.

Southgate accepted it was a difficult decision over Maguire.

“I have spoken with Harry, I have the insight to the story which is very different to what is being reported. You can only make decisions on facts you are aware of.

“If facts or information changes I will have to review that decision, but I have a fantastic relationship with the boy, he has been a fantastic character for us – he has my support at this moment.

“I’m not going to get into hypotheticals of what might happen, but I have got to reserve the right to review if further information becomes available.

“You always make decisions to the best of your ability given the information you have. People may agree or disagree with those decisions, but it is a position where every manger finds himself.

“Harry regrets the fact he has brought that sort of focus and attention to the team – he apologised for that – but also has his own side of the story.”