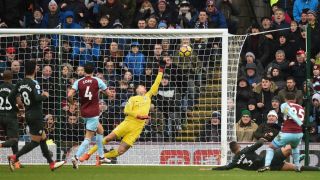 Dyche saw his Burnley side claim a hard-fought 1-1 draw against Premier League leaders City at Turf Moor on Saturday and, although the hosts were on the back foot for long periods, they might have been celebrating victory but for stunning reaction saves by Ederson to deny Ben Mee and Aaron Lennon before Johann Gudmundsson's leveller.

But it was the Brazil international's performance with the ball at his feet that also caught Dyche's eye, prompting comparisons with an esteemed former team-mate of opposite number Pep Guardiola – celebrated Dutch sweeper Koeman.

"I couldn't believe it, he nearly got a hand on that," Dyche told reporters when reflecting on Gudmundsson belatedly breaching Ederson.

"I thought 'my goodness he's going to save that as well'. He's the calmest keeper I've seen.

"It's like having Ronald Koeman in goal, he gets [the ball] and spins it around the pitch, all over the place, and that adds to their gameplan massively because he defuses the game.

"They give it back to him, he's nice and calm and then he'll clip one into midfield or clip it wide. There's not that many keepers I know who can do that and it's a massive weapon for them in the style they play.

"Not only that, he made a good save from Ben Mee and a fantastic save from Aaron Lennon, an unbelievable save because he hit it so clean.

"He's one of many, many top players they've got that's for sure."

Ederson's compatriot Danilo put City ahead with a spectacular strike midway through the first half but a horror-miss from Raheem Sterling meant Guardiola's men were not able to make their superiority count.

Victory for Manchester United at home to Huddersfield Town means City's substantial advantage at the summit is trimmed to 13 points with 12 games remaining. Burnley remain a point and a place above Leicester City in seventh.