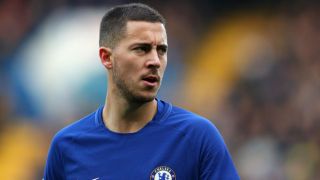 Doubts have emerged over Hazard's future at Premier League champions Chelsea after his father claimed the 27-year-old Belgium star rejected the chance to extend his contract in order to wait for a possible offer from Madrid.

However, Hazard – under contract until 2020 – seemingly moved to reassure fans at the O2 Arena, which played host to the Philadelphia 76ers and the Boston Celtics in NBA action on Thursday.

Reportedly asked whether he will sign a new deal with Chelsea, Hazard is said to have told the Mirror: "Yes.

Hazard has scored six goals and tallied two assists for Chelsea in the Premier League this season.

The former Lille star has netted 63 times and set up 37 goals in 192 league appearances since arriving at Stamford Bridge in 2012 – winning two Premier League titles as well as the Europa League.