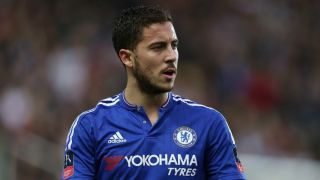 This season has been one to forget for Hazard, who only opened his 2015-16 account with a brace in Chelsea's 4-1 Premier League rout of AFC Bournemouth on Saturday.

Hazard has been linked with a move away from Chelsea as Italian manager Antonio Conte prepares to take the reins in London.

However, Hiddink backed the Belgium international attacker - who was named the PFA Player of the Year last season - to return to his best form next term.

"It's important that [Hazard] is here next year," Hiddink said. "He has some more years to go on his contract. And what I do know is that he is very happy with everything at Chelsea, and everything around Chelsea.

"He's playing free with no doubt in his mind and no frustrations, so this is a good sign for me. Now he can go on for the whole season.

"He's not fully fit yet, so without taking any risks in the upcoming days he can regain that. And then of course the mental fitness will go accordingly.

"It's been a very bad season for him, we don't like to neglect the facts. It's difficult for a talented, high-quality player like Hazard. I think this season he had a difficult season, falling into injuries, coming back, nearly getting back then getting injured again.

"When you come back properly you'll be back well, and he showed that. When he is fully fit physically and mentally then he is one of the best. And I think he can regain the [PFA] award. He has the capacity to gain it back in coming years."