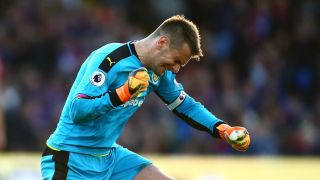 Burnley goalkeeper Tom Heaton is "more than happy" to stay at the club and is hungry to collect additional England caps.

Heaton has appeared twice as a substitute for his country and kept 10 clean sheets in the Premier League this season to help guarantee Burnley's survival.

Despite speculation linking him to Crystal Palace and Newcastle United, Burnley captain Heaton sees his future at Turf Moor, the 31-year-old having signed a four-year contract in July 2016.

"It is about playing Premier League football and continuing to work at the international set-up," Heaton said.

"I'm delighted to be involved in that and have a taste for it - and now I've got a hunger for more.

"I want to continue improving every day and I'm more than happy where I am at the moment."

PREVIEW | Tom Heaton sits down with the national media ahead of this weekend's fixture against West Ham - May 19, 2017

Heaton's England colleague Michael Keane has also been linked with a move away from Burnley at the end of the season, but the goalkeeper believes the club can absorb the loss of talent.

"It is the nature of the beast, especially at this level, that when players do well they will get talked about," said Heaton.

Sean Dyche confirms that defensive duo Ben Mee and Michael Keane remain doubts for the final game of the season against May 19, 2017

"Our biggest strength is our team ethic and our unity. Whatever happens we will deal with it and we'll keep moving forward."