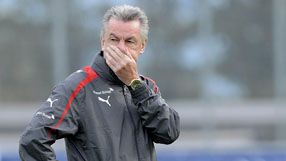 The former Borussia Dortmund and Bayern Munich coach was captured by television cameras sticking his middle finger - known in German as the "Stinkefinger" - at the referee David Fernandez at the end of Friday's 1-1 draw.

The usually unflappable Hitzfeld only raised his finger for a split second and the referee did not appear to see the incident, but it has become a big talking-point in staid Switzerland.

FIFA said in a statement that disciplinary proceedings had been opened by the deputy chairman of the disciplinary committee, Venezuela's Rafael Esquivel, as chairman Marcel Mathier is Swiss.

Hitzfeld has 10 days to present his version of the incident.